Now at present I am in Chennai, for an important job. It is something prestigious title for me to say that I am the official blogger of TEDxChennai. You can see my name and blog url featured in the TEDxChennai website here. Yes, TEDxChennai is hosted at IC & SR Auditorium, IIT, Madras. Today the first event was TEDxChennai workshop which is all about how to organize a TEDx event. Today the TEDx experts from various parts of the world, like Lara Stein, Director of TED Licensing, Kiruba Shankar, the Licensee of TEDxChennai, Anusha, the Licensee of TEDxCoimbatore and so many. And happy that I was seriously blogging about their talks sitting behind them. Wonderful day for me today. Met Chinmaye, the play back singer and got a self intro with her.

When i first entered the venue, SandeepVarma was kind enough to welcome us in a beautiful way. And after that we official bloggers and twitters got together and made a team introducing ourselves in a better way.  We had a superb time there with experts. And when i was trying to catch up with MTS's Data Card network, i went out to get the initial network, HE crossed me. And then i was trying to talk to HIM. But HE was busy with the speakers who are going to make a TEDTalk tomorrow. And again i went near to HIM. HE smiled at me, and got self introduced to HIM. HE confirmed me that i am INFIVIVEK. I was at cloud 9 when he asked me like that. HE is Mr.KIRUBA SHANKAR. Who is the backbone of TEDxChennai.
TEDxChennai Workshop:
In short and graphically i am going to explain what happened in the TEDxChennai workshop today. 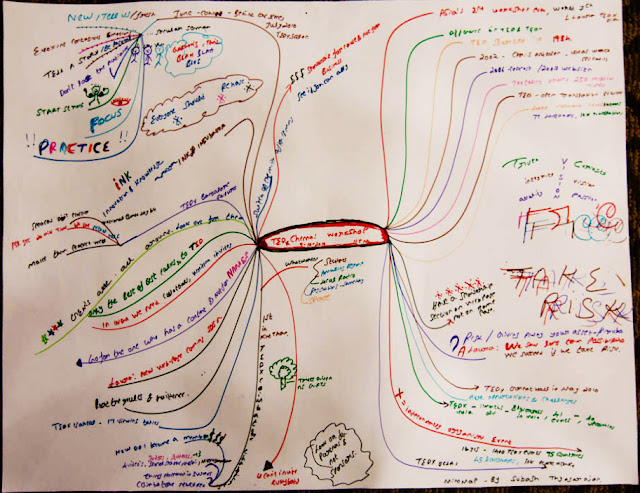 Yes, this is the mind map of the workshop today. Was beautifully designed by by Subash Thyagarajan, one of the TedxChennai Organizers. He can be reached at mailsubash at gmail dot com.
TEDxChennai:
And the grand event is starting tomorrow. We are really eager to blog their words. Watch out this space for more......