Awesome Awesome and Awesome. This is what i can say. The TEDxChennai curator Mr.Kiruba Shankar and team made the event mind blowing, magnificent, and a kick ass event. My 1st TEDx event to attend. And really gained an interest that is kindling me to be a organizer of such a TEDx. I had a chance to attend the event for free. Since i am the official blogger of the event. I am the TEDxChennai's Official BloggerFor others 3000 was the ticket, but the speakers delivered a stuff that is all most equal to 10,000 bugs. Some people who attended the TEDxDelhi claimed that TedxChennai is better than the previous. Here is the proof.

And I am very happy that
I am the official blogger of TEDxChennai. 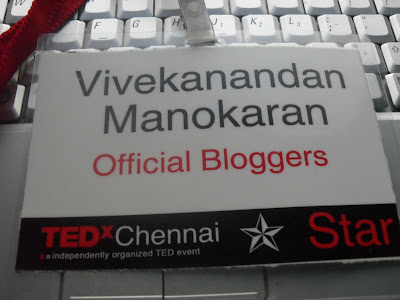 This is my
TEDxChennai IDCard 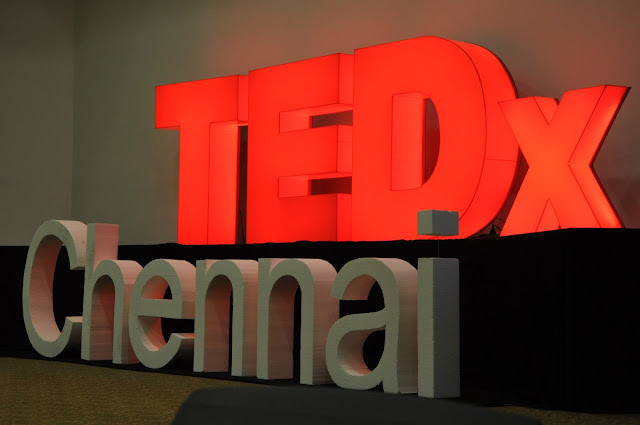 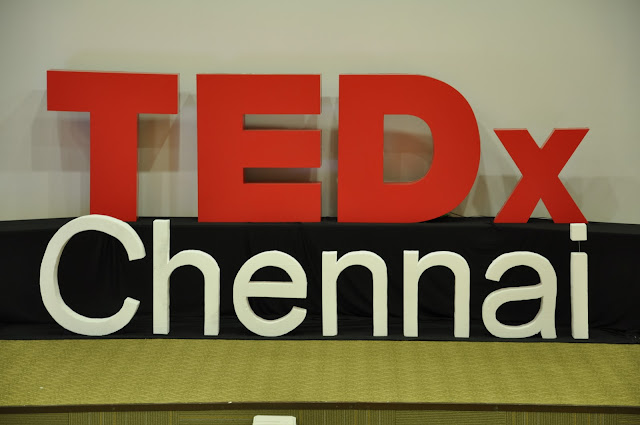 Here is the line up, Shalini, me, Arthi, Ashoka Varshini, Varun Kumar, Amar, Vasant Govind (from left to right)...

And another news about the Tweeting team is that they made the hash tag #TEDxChennai the trending tag on 10.10.10. Hats off to them..... As an official blogger i had to go with speakers words as they talk and i need to blog them. We were 5 bloggers totally and acted in a cyclic manner, each one took a speaker and blogged the speakers words....

Here is the some of the pictures that i have snapped with some great entrepreneurs and personalities like,

If i want to add all the fellow personalities whom i met here, then i must write about nearly 400 people, since all those people who came there were really superb they are doing something that is unimaginable. They rock in their fields, ranging from doctors, scientist, teachers. There i felt and noticed a wonderful diversity of people. Amazing and amazing....

And Mr.Kiruba Shankar is really a thirsty man. He announced the next TEDxChennai 2011 edition at the end of the TEDxChennai 2010 edition. It will be on " 09.10.11 ". Just watch the date. It is on the 9th date of 10 month of the 11 year of 2000 millennium series. Go here for more informations: www.tedxchennai.com

And for more pictures from TEDxChennai: